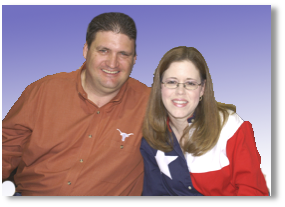 Steve was born in Odessa, Texas and spent most of his youth in Austin and then Abilene, where his parents still live.  He graduated from the University of Texas with a B.S. in Radio-Television-Film in 1987 and then went to Southwestern Baptist Theological Seminary in Ft. Worth where he earned two degrees: M.Div. in 1991 and a D.Min. in May of 2000.

Steve married Julie King in 1989 and they have two beautiful girls who have both just graduated from college and are now working. Holley lives in Denton and works for Fidelity and Courtney teaches third grade in Conroe.

Steve was called to ministry as a college student and has served on staff in churches since 1984.  He has been a youth minister, a media minister and served as the pastor of Spring Creek Baptist Church for over 20 years.  With a love for missions that traces back to his first mission trip to South Dakota at age 12, Steve helped found ETC Ministries in 2006 to help churches become more involved in missions.  Over the years he has traveled to the Far East, Middle East, Europe, South America, and across the United States leading mission trips.  In August of 2013 he and Julie responded to a clear direction from God to leave his church and pursue leading ETC Ministries full time.  As the director of ETC Ministries Steve connects churches to mission opportunities and also leads mission trips around the world.